100 COUPLES GOT MARRIED IN THE AIR

100 couples simultaneously got married in the hot-air balloons in central China last Monday has set a new world record for the most people exchanging wedding vows in the air, according to the Guinness World Records. However, have yet to officially confirm whether the attempt successfully met their criteria.

The undertaking took place at the first edition of the World Fly-in Expo (WFE), which was held in Wuhan, Hubei Province from November 4 to 7 and jointly organized by the FAI, the world governing body for air sports.

All one hundred hot-air balloons were securely tethered, allowing them to float just a few meters above the ground. Pilot Zuo Dan added that hot-air balloons are the safest among all the aircraft because they don’t have engines but fly solely on the heat. 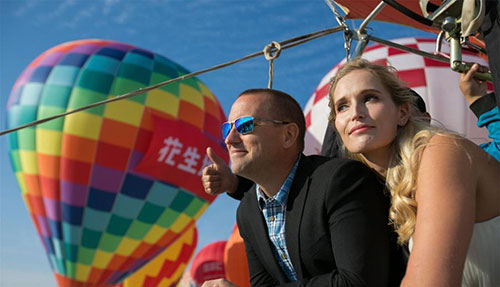 After the airborne ceremony, the scenery was very beautiful and really romantic which is to get married along with another 99 other couples in the air. The attempt comes just nine days after thirty couples held a group wedding ceremony on hot-air balloons at Barolo Eco Valley in Nanjing City, capital of east China’s Jiangsu Province. Organised by the Wuhan Economic and Technical Developing Zone (Hannan District Government) and the Wuhan Sport Bureau, the four-day 2017 World Fly-in Expo welcomed more than 300,000 spectators and 1,000 pilots from more than 30 countries. It also featured almost 800 aircraft and 200 general aviation exhibitors.